We lose people we love,
it is 'a take for granted' fact of life,
we grieve on and on,
but hopefully,
we eventually are called
to learn to live better
because of it.
I did!

In honor of my best friend, Jennifer.
I  often wear candy bracelets,
blow bubbles everywhere I go,
have a swing set in my back yard,
put pinwheels on anything,
which led to an event called
'Paddles and Pinwheels' in her honor!
AND I repost this letter
every February. 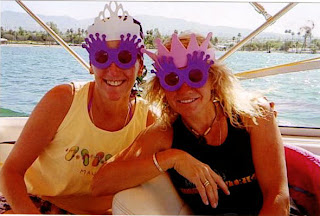 I started this journey with you
promising myself
to trust and believe in miracles
to raise you up
and make you most important
someone in my life!
To hold on to the most insignificant
moments like shiney silver treasures,
to be strong and the most
necessary kind of friend,
a guarantee there
would be no doubt you were
absolutely loved!

Yet, I write this knowing you
won’t ever see it...
and I am weighted with wishes
I didn’t even know I would have
such a surprise collection
of raw regrets
I had tried to avoid...and somehow...didn't.
So I say this...

Dear Jennifer,
I wish I would have kissed
your face more
and held your hands in random affection
I wish I had a 100 things
with your handwriting on it,
I wish the obvious like
finishing the cancer coloring book
and that you could have seen
your cartoon self,
'Dashing Deliah' in print.
I wish when you asked me
to tell you what I wanted of yours,
I would have boldly handed you a list...
ONLY, so you would have been touched by the
silly things I valued as parts of you!

I wish I had hours of you recorded
telling me what you wanted and
dreamed of and were afraid of.
I wish every time we had talked
I would have been courageous
enough to ask
“what frightens you today?”
or tell me something important...!
I wish I would have stayed
with you in Chicago that winter,
when you were so lonely and scared.
I wish I didn’t think it was enough
just to take your calls at any hour or
make you a CD of songs
so you would stop
watching the DVD
or that sending you a warm jacket
could remotely make up
for my not being there!
I wish I would have payed attention
more to the moments and the days,
slipping away.

I wish I could have heard
what you were telling me
when you said you didn’t
want a calendar this year.
To have seen it more fleeting
and in a brave way
than the “optimistically denial” way.
I wish, I didn’t think you would
beat this and there’d always
be more time, another day
another phone call, another race.

I wish I hadn’t made so many excuses
for not stopping by
and just pushed past them,
(maybe even knocking him down
in the process.)
I wish when you called that last Saturday
I would have kept you talking
as long as you could,
and had known
how important that was.
I wish I had remembered
your chenille robe request earlier and said
'I am coming,' even tho you said, 'don’t.'
Wish I had known the last time
I hugged you was the 'last time'
...but we never really do do we?

Dear Jennifer,
I wish you could have stayed longer
and paddled oceans of turtles with us
and drank a vineyard of wine
(tho we came close)
and lie awake all night, giggling
until we couldn’t breathe
and nothing else matters
but that moment
of such hilarious joy
we were unable to name it
or remember it the next day.

Jen, you were my anchor
my safe haven, my voice of reason
my "get over it" voice
my 'crush', my counsel and my confidant,
my teammate, my best friend,
my hero!

Dear Jennifer
I wish you a heaven full of stars,
each one being someone your
life flashed on with your feisty brightness
I wish you, free from all that ever held you back
and a giant swing in the sky
with the biggest “wheees” possible.

Epilogue:
I believe in the magic,
and the divine unexplainable mysteries of life,
as well, as being a subscriber to the 'gifts' of those
who can call forward the many
who have crossed the boundaries of heaven and earth.
Because of that, I am pleased to say I know
that Jennifer is very happy being an angel
and is always, ALWAYS with me cause
she said she finds me "so interesting."
She laughed after saying this. 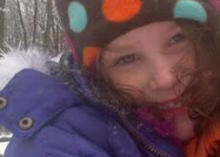 Back when the words were plentiful,
(which was pretty much all my life.)
I would go on a walk (my meditation)
and if I went without paper,
I could be seen running back home
like something was chasing me....
but really?
I WAS chasing something, the words,
I had to catch  them before they went on
to someone else who was more available.
(This is NOT unique to me, many people
of words describe something similar.)

It is true if you do not write it down the
words are gone and lost to you.

Today, as I made my mental list of things
to do on my walk, mail this, finish the floor,
fix that sprinkler, start lesson plans... blah blah.
The faces of the Sandy Hook Children
came to me with a force, I couldn't ignore!
The faces I had been posting
on Facebook daily.
(With great heartbreak and
an often 'challenged' level of commitment.)
The ones I now know by name and all the
things they loved to do and wanted to be.

These beautiful innocent children
have made such an impact on our nation,
our history, hopefully the course of future laws,
their  little lives, a more powerful voice than
any who knew them would have imagined for them.

Today, someone private messaged me asking,
"Why, was I doing the posts daily?
Had she missed something?"
It was a good question.
But the answer was not simple.
It had started out as one thing
and then became another,
something I hadn't expected.

So I ran home,
through the wash, my pouty dog behind me,
her walk cut short,
I forgot my list and wrote this down.

The news of the shootings, crippled me,
wore heavy on my days,
(like a lot of us)
And as a new teacher, it flattened me,
while lifting me to the height
of an imagined 'mother bear'
with equal the strength.
Knowing, I would stand in front of any one
of them, if the unthinkable occurred.
They belonged to me. They are mine,
which, I have to say was a delightful surprise to me.
And almost immediately
my teaching philosophy and attitude changed.
These are little people with wise, funny, spirits
hungry to be seen, adored and successful.
My style suddenly relaxed
and I began to fall in love instead!
Fall in love with their innocence rather than
their "good results" or
"why are you doing THAT?" behavior.

I often suffer from loneliness and depression.

The balance between a social persona
and the creative fire that requires a solitary existence,
is a constant battle and source of frustration.
The Holidays, of course, the most daunting challenge.
Truth told, I am not a fan
and I could just as well do without them.

Facebook provides me with a window onto the world
and connects me from my own office/studio,
in between creative adventures.
However virtual my friends are,
I am grateful!
There is much that can be said about Facebook,
both negative and positive.
Drawbacks and enhancements!
But social media has a large role
in our technology based society,
like it or not. Like anything in life,
we must ask ourselves,
"How will I use this for good?
What is my intention?"

Early on, I decided to have guidelines.
My personal standards being only post
to inspire, promote or entertain!
Often with cryptic form of poetry
or a short storytelling language.
(Trying my best to adhere to that,
admittedly, I fell short on occasion. Sigh!)
It was a playground, an audience for my words,
and since I wasn't writing anything else,
it was a manageable format.

The weekend after the shootings.
I had watched nothing about it,
but was weighted by it,
like the rest of the world!
A friend's post suggested to dedicate one day,
for each person with some act of kindness,
I loved the idea! Seemed like
a way to take action in a helpless "just stand by
and watch and grieve" situation.
A local Zumba teacher, a woman of great inspiration,
and followers, joined me in this collaborate task.
And we committed to doing it, daily together.
She did better than I.

Because with the first post of Charlotte Bacon,
I realized I didn't want to do this,
I couldn't do this!
It was too much a vacuum of grief,
to start everyday with,
researching their stories,
see their shining faces in photos,
weeping over the words written about them.
And WHAT was my intention after all?
Being my nature is about mostly living
in kindness anyways,
I REALLY, didn't want to report
on that publicly or daily!
And mostly I did NOT want to draw
any attention towards myself
on the wake of a tragedy,
I didn't 'personally' belong to.

So that first day, I dropped the ball.

But a promise is a promise!
My intention cleared and I decided
to get to know them,
by telling their story, one for each day.
And I fell in love with one after another.
Thought about them throughout the day,
carried their smiles in my mental pockets!
Careful and creative about the words
I could best use to honor their lives.
Without realizing it, I was writing again,
just short stories, about what I knew
of these "little lightworkers"
and their heroic teachers,
'my words' returned in the course of this promise.

And THEY really are magic makers,
change creators, little big souls.
These "Indigo Children" have done much already,
across the country.
They reminded me how important our stories are
(the obvious shortness of life)
and that as a writer, it was my job,
NO, it's my privilege to pass it along!
(Minus any applause
or appreciation for my actions.)
Like a ripple or a flame,
it is a vibration that has the power
to create a planetary shift and redefine the tragedy.
Sometimes that is ALL we can do!

Yesterday, when I stood with a friend,
in front the current People magazine,
I pointed to each one of them on the cover,
Chase, Jesse, Daniel, Grace, Anne Marie,
Josephine, James, Olivia, Catherine....
and told her what I knew about them.
They weren't just faces to me anymore,
they belonged to me,
they were 'my children', I had been touched
and honored by their shiny, charming, wondrous
bright spirits.

These children, these teachers, belong to all of us!

Thank you, for following me in this tribute and
as we head into a new year
of great possibility,
please remember them and
watch for the miracles
they will most certainly make happen...
not because they... died
but because they 'lived'! 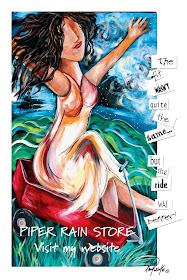 Piper Rain
I am a writer a journal keeper, committed to recording my celebrations, my struggles, my loves & my losses- It’s the air I breathe. I am a poet, of interpreted silences, a simple voice of common words. Sometimes serious, sometimes silly! I am an artist, an illustrator, a teacher, by degree & by nature. I love the whimsical and wild things of children AND adults who remember what it means to be curiously imaginative.... still wild, still free. I am a woman, a woman becoming, a woman whose journey's been to believe in my own voice and power, and to become the sky!